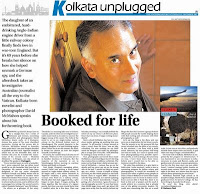 Back in March, my Aussie journalist friend, David McMahon asked me if I would be kind enough to read his latest novel, Muskoka Maharani, Penguin Books, 2010, and post about it on my blog. Of course, I told him it would be a delight. Well, it took forever and a day for it to arrive from India, then it took just as long for me to get around to actually reading it.

First, I had to find the meaning of the unusual title. Muskoka is a municipality two hours north of Toronto, and Maharani is a princess in India. This all makes complete sense after finishing the book, which is set basically in and around a fictitious little Anglo-Indian railway colony in pre-Indepence east India. The term Anglo-Indian, during the colonial era, was used to refer to those people who were of strictly British descent, but were born and raised in India, usually because their parents were serving in the colonial administration or armed forces.
The story begins in the present with Harry Barnsley, an Australian newspaper reporter, who, I can't help but believe, is McMahon's own alter ego. If Barnsley doesn't come up with a hot story, his job at the paper is over. His Anglo-Indian advertising director gives him a lead in far off Muskoka, Canada, where her Aunt Serena has long kept a secret about assisting in the capture of a certain German spy in World War II. He travels to Muskoka to track down Serena and land his much needed story.

The thing I like best about this book, is that it's peppered with charming details of Anglo-Indian life in the 1930s. McMahon, who was raised in India himself, masterfully conveys these unique first hand bits of culture and domesticity. In fact, I found myself wishing he had included more of them. There is one lovely scene in particular, in which the servant woman would use the ash, leftover from the previous day's fire, to make a paste to wash the dishes. "...Jeera would rinse everything in the sink. Then, taking some of the ash in her right hand, she would rub it carefully across the wet surface of the first piece of cutlery and crockery...every square inch of the object she was washing....before giving the item one final rinse under the water to leave the surface looking as good as new."

Towards the end of the book, the story shifts to 1940 England, were Serena is a nurse, enlisted into Churchill's Special Operations Executive. I especially enjoyed these chapters, which take on a bit of a Charlotte Gray feel, and actually wish more detail had been devoted to these intriguing war time events surrounding Dunkirk.

Sixty years later, the revelation of Serena's secret, (a spoiler, so I can't tell) takes Harry Barnsley to Vatican City. Even though I feel the surprise ending is just a tad outlandish, Muskoka Maharani is a well written, interesting read, set in a place and time in India, which I previously knew very little about.
at 11:30 PM