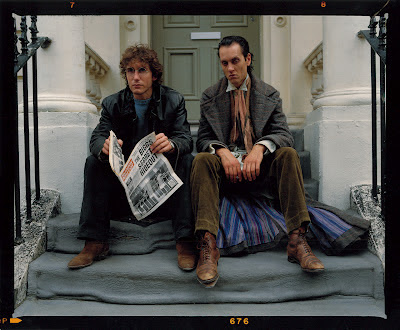 It's been a while since I enjoyed a film this much. It's quirky and smart; I squawked all the way through, until the touching scene at the end, which caught me by surprise. Set in 1969 London, it's about two struggling actors, friends and roommates, who decide (possibly because their filthy kitchen is harboring vermin, or because of lack of sufficient food and booze) to escape to Uncle Monty's house in the country for a much needed holiday.

Perfectly cast, and brilliantly acted by Richard Grant and Paul McGann, who play the roommates, and Richard Griffiths, marvelous as the intellectual gay, Uncle Monty. It's surprising Grant did not receive much deserved recognition for his role as the arrogant, condescending Withnail, who somehow manages, at the same time, to be quite adorable.

The film plays out well because of director Bruce Robinson's deliciously dry, quotable lines. There are so many, and they fly so quickly, that each viewing will only get better. Also, great retro music throughout. It's now officially on my favorite films shortlist. This is one I'm going to want to watch over and over. I give it two woolly socks up, even in 90 degree weather.


"We've gone on holiday by mistake."