I've been thinking a lot about Toni Frissell this week, since I have one of her stunning underwater fashion shots as my Facebook banner. She's remembered today, principally for her high-fashion photography for Vogue and Harper's Bazaar, but she also volunteered her photographic services to the American Red Cross, Women's Army Corps, and Eighth Army Air Force during WWII. On their behalf, she produced thousands of images of nurses, front-line soldiers, WACs, African-American airmen, and orphaned children.

Frissell's leap from fashion photography into war reportage echoed the desires of earlier generations of newswomen to move from "soft news" of fashion and society pages into the "hard news" of the front page. On volunteering for the American Red Cross in 1941, Frissell said: "I became so frustrated with fashions that I wanted to prove to myself that I could do a real reporting job." 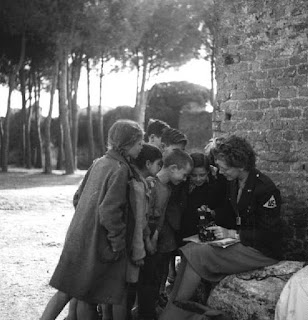 Frissell's work usually involved creating images to support the publicity objectives of her subjects. Her photographs of WACs in training and under review by President Franklin Roosevelt fit into a media campaign devised to counter negative public perception of women in uniform. Likewise, Frissell's images of the African American fighter pilots of the elite 332nd Fighter Group were intended to encourage positive public attitudes about the fitness of blacks to handle demanding military jobs.

Here are faces that I have found memorable. If they are not all as happy as kings, it is because in this imperfect world and these hazardous times, the camera's eye, like the eye of a child, often sees true.   ―Toni Frissell

source: The Library of Congress
at 6:46 PM