A week or two ago, my illustrious blog friend, Alan Burnett (today revealing his nickname "Ali") left this comment on my recent post on Charles Simic:


There must be something about
certain characteristics that pool together:
born collector, notebook-keeper, blog writer.
Same ingredients, similar brew and a knowledge
of what you like, I'll probably like.
Off to look up Simic
(just written his name down in my note-book).
That day, unbeknownst to me, Alan posted an article on his blog titled "Swaying His Legs Like a Pair of Woolen-Coated Pendulums", about writing a novel in a series, on the back of postcards mailed to a friend (I loved the woolliness of the title, as well as the postcards) and the very same day, I posted my poem "Exposition of Sleep" which also included "pendulum", not exactly an everyday sort of word.

After this series of small synchronicities, Alan proposed an experiment.  We each would choose a postcard which would represent a current thought or interest, add a message identifying the thought, and mail them to each other on the same day, Saturday, February 26, 2011.

I quickly pulled out three postcards from my collection.  One, a girl in WWII military uniform with a tie, a street scene with a vintage bookseller in Paris, and a 1960s era TWA postcard, depicting an American girl with a red bicycle, in Paris.  It was a hard decision, but I finally chose the last.

Here is the card Alan sent me.  Upon first glance, I immediately noticed Lee Miller in military uniform with a tie, very similar to one of my unmailed choices. He mentions going to Oxford and buying a lot of vintage postcards all based on book covers; this corresponds with my other card choice.  But, what I didn't initially see, is the fact that the book, The Lives of Lee Miller by Antony Penrose, is about a successful American fashion model  who moved to Paris in the 1920s and established herself as a photographer, producing some of the most powerful images of the century.

So what is the result of our little experiment?  Even though the two postcards are very different, (hop over to Alan's blog and take a look at mine) there is still a wealth of similarities lurking under the surface.

In the body of the written correspondence, we both mention personal adventures and vintage ephemera. He mentions traveling to Oxford; I mention New York.  He talks about the art form drama; I mention poetry. His card shows a talented female artist Lee Miller; I mention Edna St. Vincent Millay. 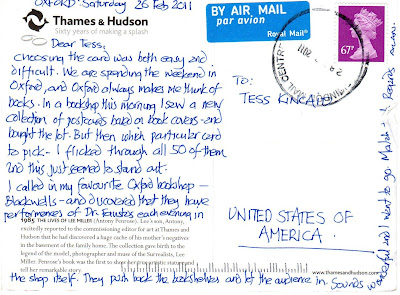 Among all the similarities, it all boils down to this:  both our cards picture American girls who went to Paris, a fascinating mutual theme. These synchonicites are not surprising in two people with similar interests, characteristics that pool together like doppelgangers. It's amazing how kindred spirits can connect so easily in this digital age of blogging. But, when I told WT the results of our little test, he laughed.  "Does Alan know you're psychic?"