I have to report, sir,
I've been unable to remove the stains from your bathtub. 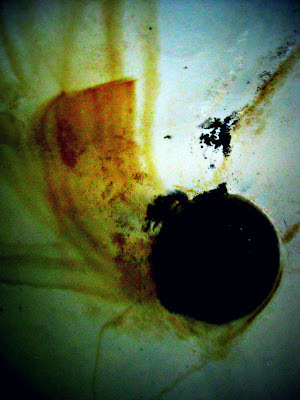 There are advantages and disadvantages to well water.  I have to admit, the delicious icy-cold stone flavor out-weighs rust and limestone deposits. When we first moved to Willow Manor 24 years ago, I was appalled at the rust, dutifully scrubbing the skin from my fingers every week with some God-awful rust remover. What can I say? I've mellowed since then; I embrace the patina. It's harmless rust. Think of it as art.

One nice advantage to having a well, is that there's no water bill. However, last week I turned on the water at the kitchen sink and nothing, not a drip. Eight hours later, I was the proud owner of a new $2,000 well pump, efficiently pulling up gallons of that delicious, icy, Scioto limestone water.  Well, I guess everything evens out, in the end.
at 8:19 AM