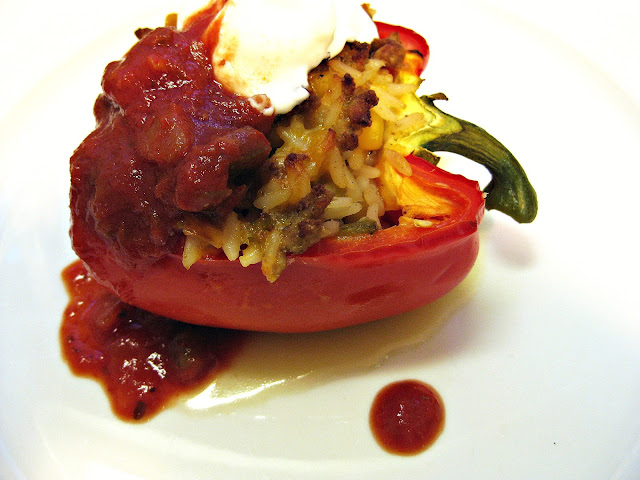 This is a yummy twist on the old standby.  I made a whole tray of these ahead of time, slid them in the fridge, until ready to bake.  The leftovers were just as tasty, too.  These were supposed to be sprinkled with chopped scallions, which would have made for a prettier presentation, but unfortunately I forgot to pick some up at the grocery.  You get the idea.

Cook the beef and onion in a large skillet, stir in the corn, chilies, cumin, rice, 1/2 cup Monterey Jack, salt and pepper to taste.  Arrange the peppers in a 9x13 baking dish, divide the mixture among the peppers, add 1/2 cup water to the dish, cover with foil, and bake 375 degrees until the peppers are soft, 20-30 minutes (tender, but not falling apart).  Uncover, sprinkle with remaining cheese, bake until browned, 5-7 minutes more.  Serve with yogurt or sour cream, salsa, and scallions.  Yummingtons.