That's the effect of living backwards, the Queen said kindly: it always makes one
a little giddy at first--Living backwards!
Alice repeated in great astonishment. I never heard of such a thing!
--but there's one great advantage in it, that one's memory works both ways.
I'm sure MINE only works one way, Alice remarked.
I can't remember things before they happen.
It's a poor sort of memory that only works backwards, the Queen remarked.
Lewis Carroll, Through the Looking-Glass
I don't understand synchronicities, but they happen to me quite often, usually visiting in groups of threes.  Do these meaningful coincidences randomly land in our laps, or are we tuned into a certain subject and therefore take note?  I'm not sure, but I think it's fascinating. They certainly grab my attention. Does it mean my memory works both ways? I like to think so. 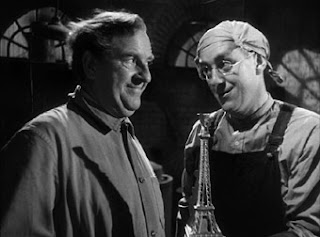 One morning last week, for instance, it all started at my local Goodwill store, when I spotted a quirky little French conversational textbook, Ces Gens Qui Passent (The People That Pass), 1951, by Alice and Paul Langellier. I loved that it was full of delightful pen and ink illustrations by Andre Gerard. It was only $1.50, so I scooped it up and popped it in my bag.

Later that same afternoon, my daughter texted to say she had arrived safely in Paris for a visit with friends. For dinner, that evening, totally unplanned, mind you, I made a spur-of-the-moment delicious rustic French chicken recipe from my new I Know How to Cook book, by Ginette Mathiot. (Stay tuned for the recipe later this week.) 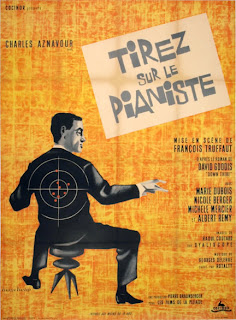 Afterwards, we turned on Turner Classic Movies and The Lavender Hill Mob, also made in 1951, by the way, was playing. It's a charming little film by Ealing Studios, about a timid bank transfer agent (Alec Guinness) who plans a gold heist and arranges for it to be melted down into Eiffel Tower souvenirs.  There's a fabulously silly film sequence of Guinness and Stanley Holloway, his cohort in crime, dizzily running down the steps of the Eiffel Tower, still spinning when they reach the bottom.

Last, but not least, shuffling through the mail, I spotted a red Netflix envelope.  Inside was a film I added months ago, Shoot the Piano Player (Tirez Sur le Pianiste), 1960, a casual, but magical French film, with lots of excellent acting and a great musical score. Ahead of it's time, I think. I'm adding it to my favorites list.