Holy Father, you're always welcome at the manor 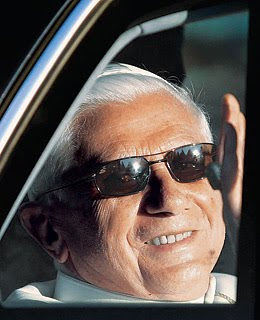 From time to time, I have unusual hits on my sitemeter; Disney, Random House and Turner Broadcasting, to name a few. But this past Saturday, was the most unique in my whole existence of blogging. I actually had a hit from the Holy See, the Vatican City State. Okay, I realize there are 900 some residents of the Vatican, but it's fun to think that His Holiness, Pope Benedict XVI, just might have been reading my humble little blog, himself.

Wait, it gets more interesting. The search words for this particular hit were "Colonel Bogey March lyrics". I can just see His Holiness bopping around his quarters whistling Colonel Bogey, then curious as to the lyrics, sitting down with his laptop to Google-up Willow Manor, and read my post.

By the way, did you know the pope has his own Pontifical March? It's played at solemn occasions of the State and ceremonies in which he is present. When the Vatican's flag is ceremonially raised, only the first eight bars are played. The music was composed in 1869 by Charles Gounod, for the celebration on April 11, 1869 of Pope Pius IX's silver jubilee. Click [HERE] for a listen. The English version of the lyrics are as follows:

O Rome immortal of Martyrs and Saints,
O immortal Rome, accept our praises:
Glory in the heavens to God our Lord,
And peace to men who love Christ!
To You we come, Angelic Pastor,
In You we see the gentle Redeemer,
The Holy Heir of true and holy Faith;
Comfort and refuge of those who believe and fight.
Force and terror will not prevail,
But Truth and Love will reign.

It is a tad more pure and majestic than the common Colonel Bogey March, sung by British artillery men. I hope he wasn't too taken aback to discover the lyrics. There are several versions, but this is one of the most well known:

Hitler has only one left ball
Göring has two but they are small.
Himmler was somewhat similar
And poor old Goebbels has no balls at all.

Oh, and another clue that His Holiness, himself, might have visited Willow Manor? The language used on this particular search was notItalian, but happened to be German, his native tongue.
at 7:00 AM