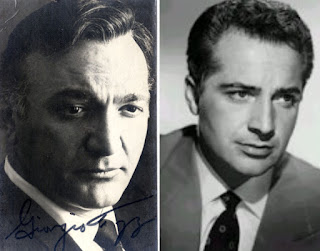 "Some Enchanted Evening' has been playing in my head ever since
the magnificent Bryn Terfel sang it at the Manor Ball, which got me
thinking about the movie South Pacific. Did you know that Rossano
Brazzi was actually dubbed by the dashing Giorgio Tozzi, a leading
bass for many years at the Metropolitan opera? I've always
wondered why Tozzi, himself, wasn't cast in the role of the
Frenchman, Emile de Becque.
.
I had the good fortune to meet the ever-so-charming Mr. Tozzi
when he was Professor of Voice at Indiana University's distinguished
Jacobs School of Music, when my daughter was an undergrad in the
program. (That's Tozzi, pictured above on the left, with Rossano
Brazzi. Personally, I think Mr. Tozzi is much more handsome.)
Speaking of dubbed voices, Marni Nixon is known as "The Ghostess
with the Mostess" since she dubbed some of the most famous female
musical film roles ever. Gosh, she's so beautiful, I'm thinking the
same thing. Why wasn't she cast in these fabulous roles, since she
did all the fabulous singing? (That's Nixon pictured above with
Deborah Kerr.) She had the uncanny ability to adapt her singing
voice to sound exactly like the actual actresses' speaking voices.
Some of the highlights of her career were providing Marilyn Monroe
with a few top notes in her performance of "Diamonds Are a Girl's
Best Friend" in Gentlemen Prefer Blondes (1953), the singing voice
for Deborah Kerr in the Rodgers & Hammerstein's The King and I
(1956), Deborah Kerr's singing voice again in An Affair to Remember
(1957), the singing voice for Natalie Wood in West Side Story (1961).
Nixon also sang some parts of the score of Anita by Rita Moreno.
In parts of the quintet setting of the song "Tonight", she sings both
Maria and Anita's lines, according to her autobiography. And one
more, she also did the singing voice for Audrey Hepburn as Eliza in
My Fair Lady (1964). 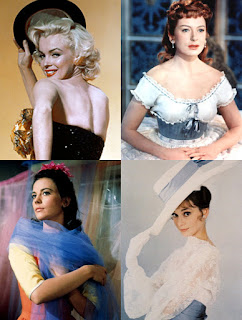 Nixon's many dubbing roles did not appear on the titles of any of the
films, and she did not begin to be fully credited or widely
acknowledged until the movies' subsequent release on VHS, decades
later. She has now, under her own name, recorded songs by Jerome
Kern, George Gershwin, Arnold Schönberg, Charles Ives, and Anton
Webern. The gorgeous Ms. Nixon is still singing today, by the way, at
the age of 78. 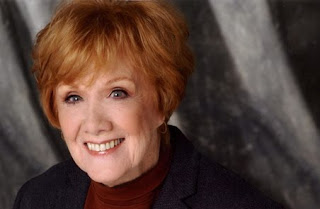