An Angel at my Table 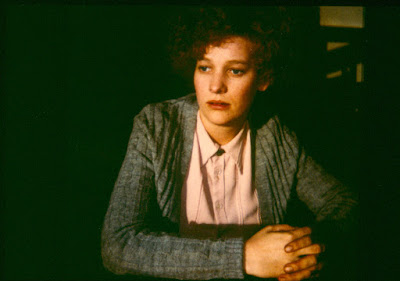 You've probably noticed from my sidebar, that I'm reading a book by New Zealand novelist and poet, Janet Frame, Towards Another Summer, written while she was in London in 1963. She considered the book to be too personal to share during her lifetime and it was just published this year (2009).

This week's Netflix pick An Angel at my Table, 1989, was originally produced as a three part miniseries for New Zealand television. I had seen this movie years ago, but wanted to watch it again, since my interest in Frame has been renewed with the novel. I enjoyed it even more the second time around.

It is superbly directed by Jane Campion (The Piano) and is based on the autobiography Janet Frame. Starting with her birth in 1924, it covers the first forty years of her life and takes nearly three hours to tell the story. The film is divided into three sections, but I was so intrigued, I had to watch the whole thing at one setting.

Suffering from introversion and depression, Frame was misdiagnosed as schizophrenic and spent eight years in a psychiatric hospital, nearly lobotomized. Frame would later become one of New Zealand's most celebrated poets and novelists, publishing her first books while she was still confined to a mental ward.

This film follows her harrowing and often frightening journey as she struggles to accomplish her life's dream of writing, which she used as a form of survival and self defense. Three talented actors play Frame at different ages throughout the film, with Kerry Fox, pictured above, giving a powerful performance as the young adult Janet, whose skill and creative perseverance would prove to be her salvation.

Email ThisBlogThis!Share to TwitterShare to FacebookShare to Pinterest
Labels: An Angel At My Table, books, film, Jane Campion, Janet Frame