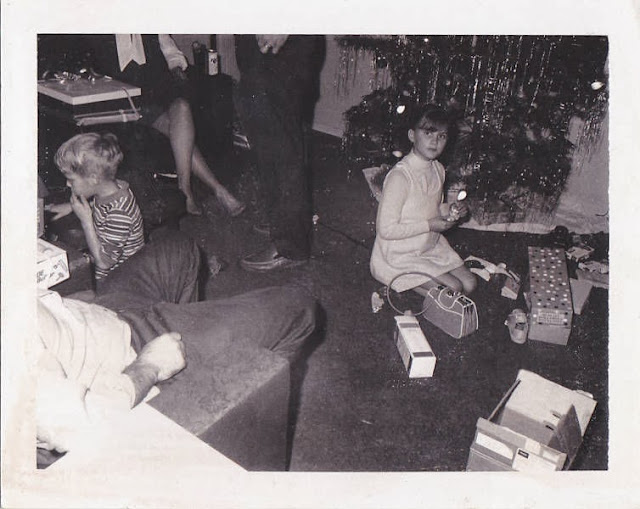 I never make New Year's resolutions; but this year I am making an exception. My dearest friend told me of a dream. Dreams that include me make me feel uneasy, as if a look-alike captured on surveillance camera is doing something beyond my control.

This particular dream was of a post I had written about my childhood in rural Indiana. It felt compellingly right. I am inspired. (I don't inspire easily.) So, watch this space for a weekly nostalgic selfie; simple snapshots the Midwest, hopefully presented with a bit of quirk and intrigue.

My Christmas tree is still standing at Willow Manor. It stays up later every year. Ground Hog's Day is the usual expiration date, but Easter is not unreasonable. My paternal grandmother, Alice, was known to keep her tree up well into April. If one family member could not make it home for the holidays, she insisted on it standing firmly in the living room window until they made it home. Even if it meant spring break.

Trees in the 1950s were on the sparse side, anyway, as far as branches were concerned. They looked even more skeletal post-needles, colored lights wound around naked branches, limp ten-year-old tinsel, aged to a matte lead-gray. Even in mid-March, the lights on Alice's tree were religiously plugged into the wall socket at dusk. When her back was turned, my teenage Aunt Dee would draw the curtains, embarrassed what the neighbors in Burlington, Indiana might think of the icky ghost tree.


Grandma only knew me as a shy, precocious little girl. I think she would appreciate my grown-up passion, occasional strength, my small blatant tree, watered well into spring. As someone mentioned last week, it looks more like a Christmas bouquet, than a tree; a bouquet celebrating the new year, love, a hopeful me. She would like that I hang her faded-pink bell ornament near the top.


*Photo not me, but a close representation