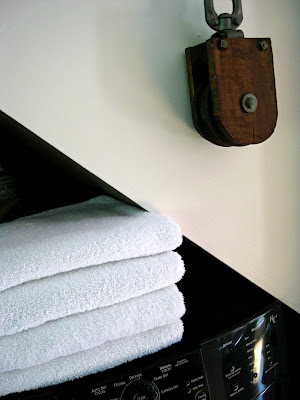 This week I'm channeling my inner Julie with another one of my favorite things: freshly laundered white bath towels. I appreciate them all the more this week, after the 85 mph derecho (pronounced day-RAY-cho) descended on Central Ohio late Friday afternoon, June 29, leaving Willow Manor without power for two days. Derecho comes from the Spanish word for "straight" or direct, in contrast with a tornado, which is a twisted wind.

Not only was it the hottest week of the summer, but when Willow Manor loses power, the well pump is out, too.  So, no water.  I ended up staying with my two sons, who thankfully had power.  The contents of the fridge was hauled to their place, along with all my girl-maintenance stuff.  After taking a much needed shower, I reached out to the towel bar, and quickly realized I should have brought my own.  Hanging there, was a mangy thing, I later learned, is fondly known as "Old Blue".  It's a good thing Old Blue is blue. If it was supposed to be white, I would have been even more frightened.

By the way, remember when everything in the 70s was earth-tone?  I still have a few threadbare brown bath towels that were wedding gifts, delegated as "dog-towels".  Sturdy things.  They even survived the dogs. I'll be glad when these dog days are over. Come, come, sweet October.


The real things haven't changed.
It is still best to be honest and truthful;
to make the most of what we have;
to be happy with simple pleasures;
and have courage when things go wrong.