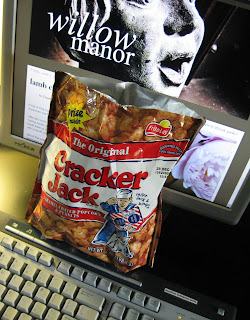 Friday afternoon, my local Aldi store happened to have a huge display of Cracker Jack bags on special for 99 cents each, right in front of the check out lanes. For old times sake, I tossed a bag in my cart. I haven't eaten any in ages, not since I was at least five years old. Part of the whole Cracker Jack experience was the individual box, the feeling of ownership, opening it up like a birthday present and looking for the prize tucked inside. So, I was a bit disappointed that foil bags have replaced the lovely little boxes. As I tore the tear off strip at the top, I wondered if they still included prizes. My heart skipped a beat. Maybe I'd find one of those cute pot metal rings like Paul Varjak so charmingly had engraved at Tiffany's for Holly Golightly? Or maybe one of those teeny plastic hand tools I remember from the 50s? 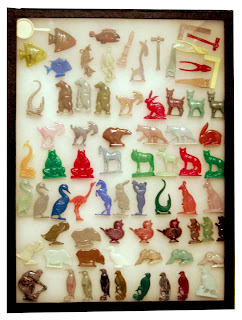 Sure enough, on the top was one of those familiar paper packets. I ooo-ed with delight and carefully opened the perforated edge. Inside was a tiny booklet with a lame cartoon of two mountain climbers scaling a pencil. The image had two slits and was dubbed a "pencil topper", supposedly to decorate the tip of a pencil. Okay, Frito Lay, I admit it was a huge letdown. But, it tasted even better than I remembered. In fact, it tasted so good, I ate the entire seven ounce bag. Actually, it's only six ounces, since there's at least an ounce of those crumbly lip-sticking kaniggets at the bottom. I nearly fell off my computer chair when I read the nutritional facts on the back of the bag. Serving size: 1/2 cup. Calories: 120. Do you know how many kernels of Cracker Jack fit into 1/2 cup? Six. Who eats just six?
According to legend, a unique popcorn, peanuts and molasses confection, that was the forerunner to Cracker Jack caramel coated popcorn and peanuts, was introduced by F.W. Rueckheim and Brother, at the World's Columbian Exposition, Chicago's first World's Fair. In 1896, Louis Rueckheim, F.W.'s brother and partner, discovered the process for keeping the molasses-covered popcorn morsels from sticking together. Louis gave the treat to a salesman who exclaimed, "That's crackerjack!"
"Crackerjack" was originally a noun, appearing in the U.S. around 1895, meaning "a person of excellence, superior knowledge and ability." The root of "crackerjack" is a sense of "cracker" current in the early 1860s meaning "a remarkable individual" or "an outstanding example of something." This sense of "cracker" was based, in turn, on a very old (around 1460, in fact) sense of "to crack" meaning "to boast or brag." The "jack" element of "crackerjack" doesn't really mean anything. Its role in the word is to rhyme with "crack." (You know how much I adore rhymes and ditties.)
Speaking of ditties, the song "Take Me Out to the Ball Game" written by Jack Norworth and Albert Von Tilzer in 1908, immortalized the snack with the third line, "Buy me some peanuts and Cracker Jack." Since 1918, Sailor Jack and his dog, Bingo, have appeared on the packages. I noticed Jack and Bingo have a new updated 21st century look. In 1964, our Columbus, Ohio based Borden, Inc. purchased the Cracker Jack Company, and in 1997 Borden sold it's division to Frito Lay. The new packaging is okay, but come on; the prize needs a little work. 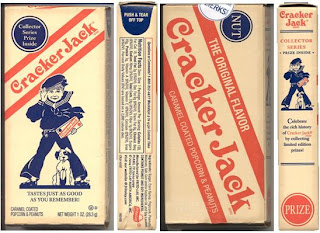