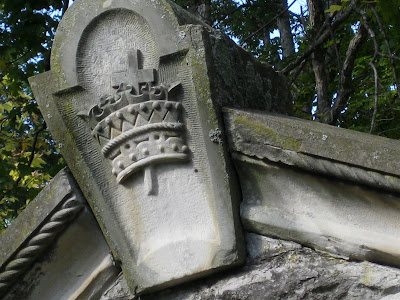 stele: also ste·la (stē'lə) pl. steles also ste·lae (-lē) An upright stone marker or slab with an inscribed or sculptured surface, used as a monument or as a
commemorative tablet in the face of a building.


Every year, I like to take at least one lovely autumnal walk through a cemetery. I enjoy the history, as well as all the various forms of funerary art. There is something very compelling, full of human truths, that draws me to these places of solace and beauty.


Tombstones were relatively simple, like the one of my fifth great grandfather, below, who was a captain in the American Revolution, until Queen Victoria, who after the death of her beloved Albert, in1861, went on a veritable mourning frenzy and led the way in making memorialization fashionable. Cemeteries were not only a pleasant respite from the dirty and noisy cities; they also became large scale public art galleries.

The words carved on Captain Robert "Robin" Hanna's stone are these:

He was a brave defender of his country's rights
and lived and died an honest man.
On one of my last visits to my dear grandfather, who passed away two years ago, at the ripe old age of 93, he took me out to some old rural Indiana cemeteries to locate the stones of our ancestors. It was a beautiful October afternoon and I don't know who enjoyed the day more, he or I.

This month, on my walk through the Oak Grove Cemetery and Arboretum in Delaware, Ohio, this stone, "Pompey King, died Apr. 8, 1844, aged 100 years", caught my eye. I was curious what information I might find on Pompey, so on my return home, I promptly did a bit of research. I found him listed on the Official
Roster of the Sons of the American Revolution Buried in Ohio. He was married September 23, 1815 to Sally Stonemia in Licking County, Ohio. I wonder what he would think about me blogging about him, some 165 years after his death? I wish I knew the origin of his unique name. What was his secret to longevity?

(for ore info o Pompey King,see addendem at the end of this post) 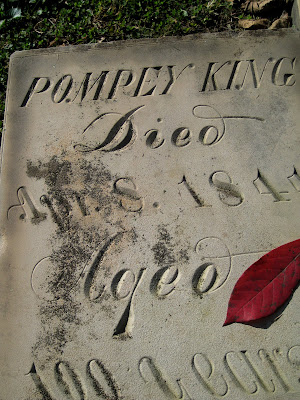 The image on the stone below is full of symbolism. A winged Death, complete with sickle, much like the one pictured in my header, is accompanied by an angel of grief (sorrow), holding an olive branch (peace), and a broken column (early death). 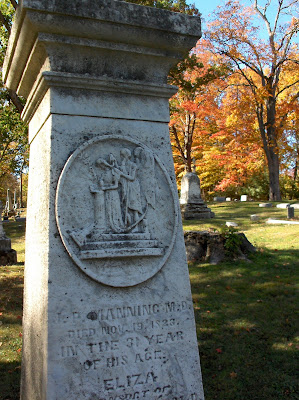 Listed below are other intriguing symbols often depicted in tombstone art. Ivy or a lamp would be beautifully symbolic. I don't know about you, but I don't think I'd like a gourd or skeleton on my stone. Hmm. Maybe a lovely willow tree would be more appropriate?


This just in...After Roy mentioned in his comment that he thought Pompey King might have been a slave, since they were often named classical names as such, I did a bit more research, and found that Pompey
King was indeed an African American, former slave and pioneer! Serving in the American Revolution was mostly likely his ticket to freedom. He was also listed a member of the First Presbyterian Church. First buried in the Old Burial Ground, his body was later moved to the Oak Grove Cemetery, in Delaware, Ohio. For more Ohio historical info from the Ohio Digital Resource Commons at Ohio Wesleyan University, visit [HERE].

Isn't it curious, that Pompey King and my Capt. Hanna were born the same year and both served our country in the revolution. I wonder if they possibly could have known each other?

Thanks, Roy. This aspect of the blogging community is one of the things I like best. ~x 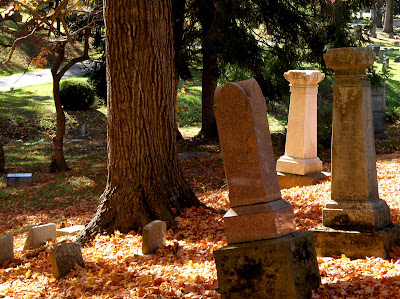